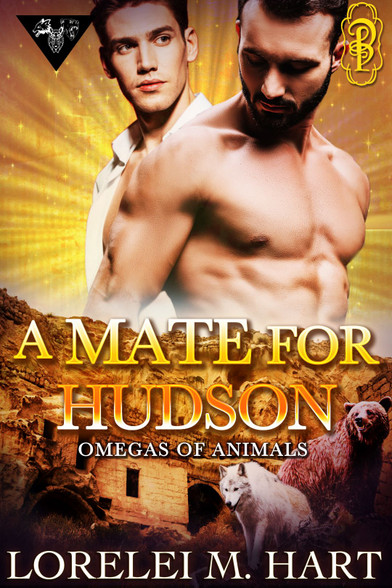 A Mate For Hudson

A MATE FOR HUDSON
by Lorelei M. Hart

It all started with a crime…

Omega wolf shifter Hudson was set up—set up for a crime he never committed. Following the advice of his pack’s seer, he fled in the middle of the night to find a new life in the desert. He finds a job at a greasy spoon diner, and it’s not much, but it’s better than where he left, even if he has to hide his true self—his wolf. When Karma comes in and offers him a new job at a shifter night club, he jumps at the chance. As much as he loves his freedom, he misses being pack. A job isn’t pack—but it might fill the void.

It all started with a blind date—a bad one…

Alpha bear shifter Shane is sick of dating; it always ends in rejection. His bear is longing for more than one-night stands—he wants a mate and cubs and all the things he knows he will never have; not once they find out he’s latent. Omegas want strong alphas who can protect them with teeth and claws, not alphas stuck in their skin. But when his roommate sets him up on one last date he begrudgingly agrees. How bad could it be? Getting punched in the face, a broken nose, and needing to be saved by an omega bad—that’s how.

So why is his bear crying out Mine?

A Mate for Hudson is a sweet with knotty heat M/M shifter mpreg romance served up with a side of daddy yums, an unexpected pregnancy, and a guaranteed HEA. It features a bear who can’t shift, an omega embarrassed by his past, a found family, an adorable baby, and some familiar faces from the Omegas of Animals universe. Each book in this series can be read as a standalone. If you like your alphas hawt, your omegas strong, and your mpreg with heart, download today.