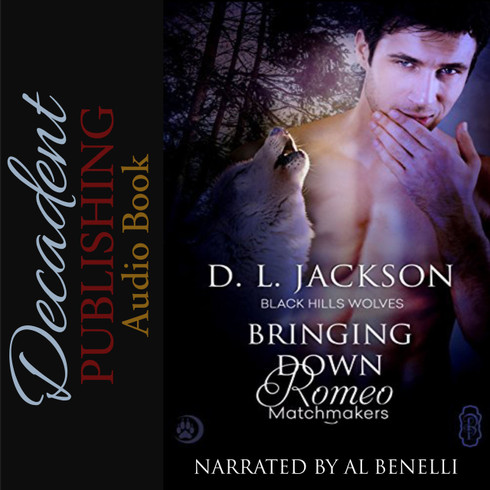 Narrated by A. T. Al Benelli

Hide your girlfriends, hide your daughters.

Tad Dawson, confirmed bachelor and runway model, has come back to the Black Hills for his brother’s wedding. Also known as Romeo for his love them and leave them attitude, Tad has a reputation to lose and a woman to win. However, he won’t be able to do it on his own, since the woman he wants would rather assault him with nail guns, power saws and rocks. Not what he expected when he turned on the charm.

Megan could use a good dose of anger management, along with a shot from Cupid’s bow, and lord knows she has a lot to be mad about when it comes to Romeo. Tad left her five years before after she declared they were mates. Not only did she have to deal with a crazy Alpha, who got off on tossing her to the wolves, she’s heard rumors Tad’s appetite for anything with a skirt has grown since he left. Not that she could confirm it. He’s hasn’t called or written once.

For Tad to win the love of his life, he’s going to need some help, and the four pack matchmakers have decided they are just the Wolves to assist, whether he wants their help or not. No tactic is too dirty or underhanded. Bringing down Romeo is going to take every trick in their match-maker’s bag.

Bagging the girl, well, that could be a bit trickier.

Will the four matchmakers beat the nearly impossible odds, or will their tactics unravel at the seams?

Before the wedding is over, someone is going down, and if the matrons have any say, it’s going to be hard.