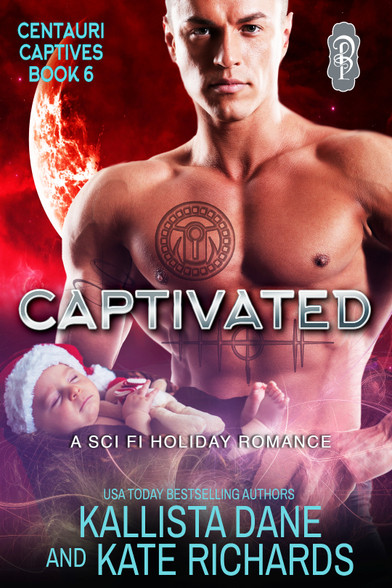 I was a powerful warrior. Feared and honored. In control of my life, my destiny. Preparing for the end.

Until I took the beautiful human as my mate.

Arythios is gone, destroyed by an evil force. Men, women, children—dead. All that remains of my world, once the pride of the galaxy, is a team of warriors, a handful of starships, and me. The last Archon.

To insure the survival of our race, I chose one of the humans sent to us as a breeder. A shy virgin with shamefully wicked secret fantasies that awakened my own dark desires. Hungers I thought had long since passed. I was determined to master her with stern discipline. Instead, she captured my heart.

Now, the rules of combat have changed. The stakes are higher than they’ve ever been before. I’m hunting a faceless enemy bent on destroying us all. But this time I’m fighting for more than my honor or my own survival. I have a mate to protect and cherish…with a new life on the way.

Centauri Captives is a steamy sci-fi romance series from USA Today Bestselling Authors Kallista Dane and Kate Richards featuring masterful alien warriors and the captive Earth women they take as mates in a desperate attempt to save their race from oblivion.

Each book in the series is a stand-alone, introducing a strong smart heroine and a super-hot alien hero in a battle of the sexes as old as the Universe. There’s no cheating, no cliffhangers – and you’re guaranteed a sexy romance with a happy ending.