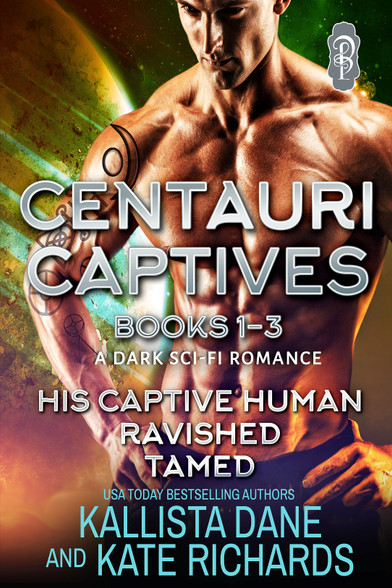 After a nasty breakup, I was determined to make some changes in my life. But when I volunteered for a diplomatic mission to the planet Arythios, I never expected to wake up naked hurtling through space on a grim alien warship. Given away by my country as a sex toy for its stern commander.
He’s huge and gray, and even more of a Dom than my old boyfriend was. I hate being his captive—but my body loves the things he does to me.

My world is gone…

We were far from home when we found out our planet Arythios had been attacked. By the time we learned of the invasion, it was too late. Men, women, children…all murdered. The only members of my race to survive were my crew and those on a handful of other vessels fortunate enough to have been away as well.

Our requests for refuge and help from the Interstellar Federation were ignored or refused, except for an offer from the leaders of Earth to send sex slaves to my crew. Though I was furious at the casual insult, I accepted. I had no choice. The females they sent will have to be more than bodies my men can use. They will have to save our race from extinction.

Though I’m still grieving the loss of my mate, it’s my duty to claim one of these primitive aliens as my own. Mate with her and produce offspring to save our race from extinction. To my dismay, the alien female I’ve chosen is stubborn and defiant, often in need of stern punishment. I’ve tried to keep her at a distance, but her virginal innocence stirs my loins, awakening a savage hunger I thought was as dead as my world.

And her beautiful soul has touched my heart.

I woke up on an alien warship staring into the eyes of a hulking gray-skinned warrior who says I’m now his property. He’s ordered me to call him Master and obey his every command. When I don’t, he punishes me.

He can be kind, too—and he makes me feel things I’ve never felt before. But he’s an alien from another world. How can someone so wrong be the right one for me?

I command an elite team of warriors. Lead them into combat, conquer my enemies. How can one human female be so hard to tame?

Homeless, hopeless, we begged the Interstellar Federation to help us track down and vanquish our enemies. They ignored our request. Instead, they sent us a handful of females from a primitive planet called Earth. “To see to the needs of your troops,” their ruler said.

I was ordered to choose one of the aliens. Breed with her. My human is stubborn and undisciplined, not like our sweet, gentle Arythian females. Her fiery spirit tempts me to indulge my darkest desires. But if she is to be my mate, she must learn to obey me. She will submit – or she will be punished.

She will be tamed.

I may be the captive of an alien warlord. But I call no man Master.

A feral child, abandoned in the wild, I survived by being stronger, tougher than the most ferocious beasts. After my rescue, I trained as a warrior. Fighting side by side with the men, yielding to none. Now I’m trapped on an alien warship. The arrogant commander thinks he owns me. He’s determined to turn me into his submissive mate. I’m determined to escape. I can never let him know I find his dominance wickedly arousing. Stern punishment won’t bring me to my knees – but I’m becoming a slave to the passion he’s awakening in me.