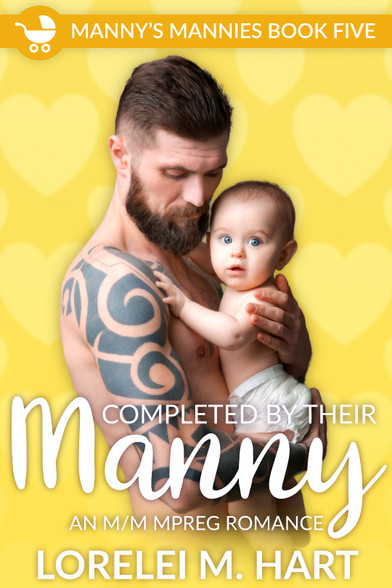 Completed by Their Manny

COMPLETED BY THEIR MANNY
by Lorelei M. Hart

Home is where your family is…
Fleeing a heart-crushing break-up after discovering his infertility, Omega Pace moves across an ocean to become a classically trained manny. When his father’s health declines, he leaves his job with a noble family to be by his side and signs on with Manny’s Mannies to take a temporary local job locally.

Sometimes achieving your goals isn’t all it’s cracked up to be...
While Adam loves his children, he doesn’t see his life as a stay-at-home omega. Soaring in his career, he finds balancing work and home challenging at best, especially when his job takes on a much more serious tone as a take-over looms.

Sometimes doing everything for your family means admitting you can’t do it on your own...
Alpha Lincoln will do anything for his family. He loves them with all he is. He puts the same passion into his career as a physician, going above and beyond the call of duty to achieve what his family needs. Seeing his omega struggling, he does the only thing he can think of to help...he calls Manny.

Pace walks into his interview, immediately sees a family in need, and pushes back his attraction to the two hot men who will become his boss. Their children need out of the chaos their lives have become and his training makes him a perfect fit. Little does he know that they are exactly what he needs as well.

Completed by Their Manny is a super sweet with knotty heat MMM Mpreg romance featuring two adorable kids who would keep anyone on their toes, an omega father who knows all too well the meaning of father guilt, a smexy alpha doctor trying to hold it all together, and the manny who will complete their family in a way they could never have imagined. Completed by Their Manny is the fifth book in the popular Manny’s Mannies series, featuring hot dads, their adorable children, and the manny who becomes so much more.