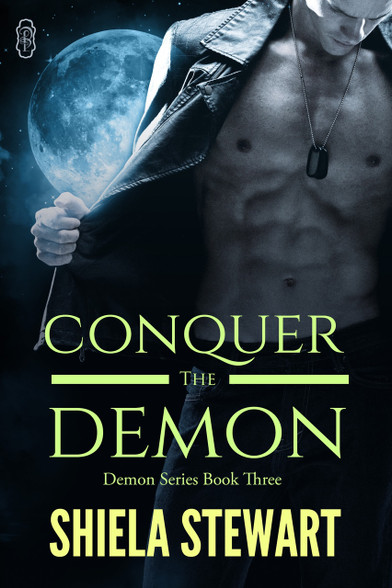 CONQUER THE DEMON
by Shiela Stewart

Bad boy rock star, Mick Monroe has never had to work for anything. One of the benefits of Satan giving him a phenomenal singing voice. So when he has a chance encounter with a sexy female officer, Mick is determined to make her his. She, on the other hand, refuses to give in.

Rookie Office, Laci Harris is a single mother with a strong determination to do it all herself. Being scorned by an ex-lover, the father of her son, she’s very jaded when dealing with men. Especially bossy, arrogant men. Despite being a fan of Mick Monroe’s band, she refuses to give in to his advances. Even if he is incredible with her son.

Mick never thought he would fall in love, not just with Laci, but her adorable son as well. But how was he going to explain to them that he’s part demon? When he learns of Satan’s plan to gather souls, using his music, he refuses to give in. But Satan doesn’t take no for an answer and threatens his loved ones. Torn between saving the world and saving his family, Mick puts a plan in motion.

Even if it costs him his life.
AMAZON
BARNES & NOBLE
GOOGLE PLAY
iBOOKS
KOBO
SMASHWORDS