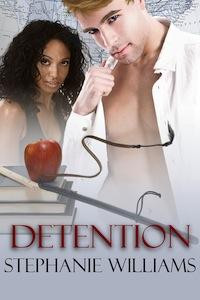 Hot for the high school principal?

You bet! What’s a woman to do when her former student comes back and reveals to her that he wants to keep her for detention?

Mia Bradford is the principal of Fremont High. She’s uncompromising and believes in tough love for her students. In fact, she’s helped many of them reach their full potential. She’s always happy to reconnect with them years later and see what they have accomplished in life. But one student in particular is making her more than a little nervous.

Brett Wyndam has seen and done a lot in his life, a lot of it rewarding and some of it tragic. But the one dream he hasn’t realized in his life is the one thing he’s always wanted: Mia Bradford. When he attended Fremont, he’d served detention under her, time after time. Now that he’s back in town, eight years later, it’s time to turn the tables and fulfill a promise to himself.

Can Brett get Mia to be honest with herself and explore the desires she’s harboring? Or will the past get in the way and ruin what could be a loving, but admittedly unconventional, relationship?