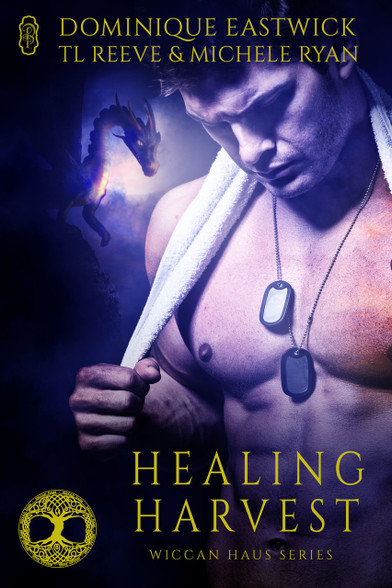 Under the harvest moon, so much is possible even for two dragons with no one else in the world.

Maaka believed his whole life he was normal. Until, one day, at the end of the haka his New Zealand rugby team chanted every game, he blew fire. Now, he has been presented with two weeks at the exclusive Wiccan Haus resort. He hopes a little rest and relaxation will take away the heat.

Vyaler Crimson has a chip on her shoulder larger than her four-foot dragon. The last place she wants to be is at the Wiccan Haus. But when Rekkus orders her presence, she can’t think of a way out. Within hours of arriving on the island, her whole world is turned upside down. Not only does she find her mate, he has no idea he is a dragon.

Can two dragons manage the heat, or will they fall hard?

Welcome back to the Wiccan Haus.

Lachlan Onyx is on mandatory leave until he can get his head on straight. Diagnosed with PTSD, he has withdrawn from everyone and everything. However, the lion in him refuses to back down and allow him to wallow in self-pity. After receiving an invitation to visit the Wiccan Haus, he takes it. If it means getting back into the field and doing what he loves, he's willing to give it a shot. Except, there's one problem—Patrick.

CIA Counter Terrorism Analyst Patrick Smith—not his real name, is burned out. After seventeen years in a gray, monitor-filled room, he needs some time away. The more he sees, or learns about, the more it tears apart his soul. So, on the advice of his therapist, he signs up for a little getaway to the Wiccan Haus, in hopes of washing away the black spots on his soul. However, when he sees Lachlan Onyx, he finds a kindred spirit and, in less than a week, his whole world is turned upside down.

Samara Ramos, isn’t sure an island retreat can help her. After a mission gone wrong, she’s spent her time rehabbing and hiding. In order to take an instructional position within military, she has to complete a critical retraining, including learning how to use her prosthetic leg. When she sees her mission commander, she doesn’t know what to do, and when she sees a man who sets her on fire, she’s ready to go home. A week with Garrett and Lachlan could destroy her, or it could bring her back from the brink of self-destruction.

Three souls will mingle for a week, but when their time is up, will they walk away, or find what they’ve been missing?

Once a powerful psychic, Molly Ranford is damaged from years of captivity and forced to use her abilities to obtain information and hurt others. Wiccan Haus is her last hope to heal and recover the powers she lost when she was freed.

Benjamin Kogan, Navy SEAL and part of the Para Elite force that rescued Molly and brought her to the Syndicate, can't stop thinking about the fragile girl he saved that day. The briefest contact overwhelmed her, leaving her paralyzed with fear. Forced to withdraw from her side, Ben knew her injured psyche couldn't handle anything else. However, he made himself a promise: he’d find the raven-haired beauty when the time was right.

During the harvest celebration at the Wiccan Haus, Molly must learn, with the love and help of her soul mate, to forgive herself and leave the past where it belongs—in the past.