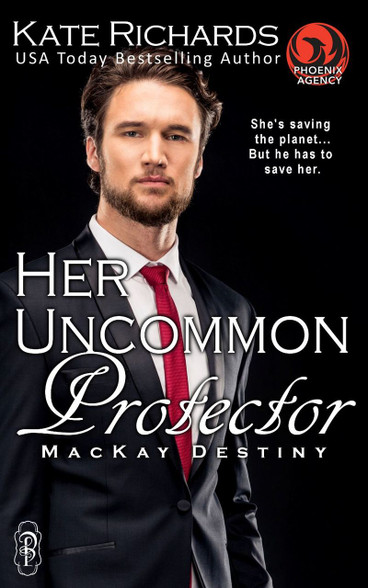 HER UNCOMMON PROTECTOR
by Kate Richards

Professor Penelope MacKay, the H2O Commando, has just returned from a volunteer job where she participated in a project designed to provide clean water to the residents of a small, isolated village. Unlike most groups, hers operates in a secretive manner, slipping in and out of hostile territories without permission from either that government or ours. This time, she may have crossed a line. Someone has followed her home, with lethal intent. In desperation, she contacts her cousin, Amelia who recently married Lord Henry Smythe the former MI6 operative and sometime agent for Phoenix.

Clive Harrington has left his work as a jet mechanic for the RAF as well as his career in undercover work for Her Majesty in his past. With Lord Henry’s offer to make him steward for some of his properties in the South of England, near where he grew up, he seizes the opportunity to rejoin civilian life and reconnect with his siblings and aging parents. Peace. Serenity. Family. But those things can get old fast for a man of action. So when Lord Henry suggests him to Dan Romeo of the Phoenix Agency, how can he say no?

One look at his protectee, and Clive suspects he’s in trouble. Their first kiss confirms it. It’s going to be tough to keep his mind on business, but her life depends on it.
AMAZON