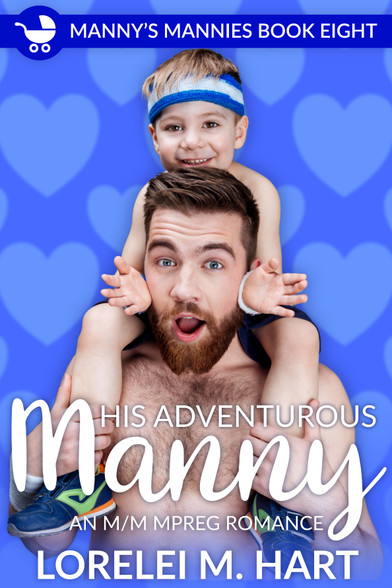 Sometimes the best adventures are the ones you don’t plan.

Alpha Antonio Ramos has spent the past decade traveling the world and filming his adventures for all to see. When his career comes to a screeching halt after a freak accident, Antonio is left unemployed and without purpose. After his brother Manny begs him to help out when yet another of his mannies runs off and gets married, he hesitantly agrees—at least he’ll have a paycheck and someplace better than his brother’s couch to sleep.

Omega Kellan Wright has been a single dad from the moment he heard the doctor at the ER say congratulations after his car accident—his alpha at the time hearing, Run for the hills. Thank goodness. Only a year later, his ex was in the paper for embezzlement and locked away. He dodged a bullet, all right. He is a strong omega and can do this parent thing on his own—that is until his new promotion requires travel. Looks like it is finally time to cave to his father’s pressure to get a manny.

When Antonio and Kellan meet, sparks fly—not that Antonio will admit it. What good is a broken alpha to a highly successful omega? Nope. He’s going to keep his hands to himself. Probably. Maybe. He’s at least going to try.

His Adventurous Manny is a sweet with knotty heat contemporary mpreg romance from the popular Manny’s Mannies series. It features an alpha starting over, an omega who is finally ready to move on, an eight-year-old wise beyond their years, a cat who thinks it’s a dog, and a family built on the best thing of all—love. If you love your alphas hawt, your omegas strong, and your mpreg with heart, this book is for you.