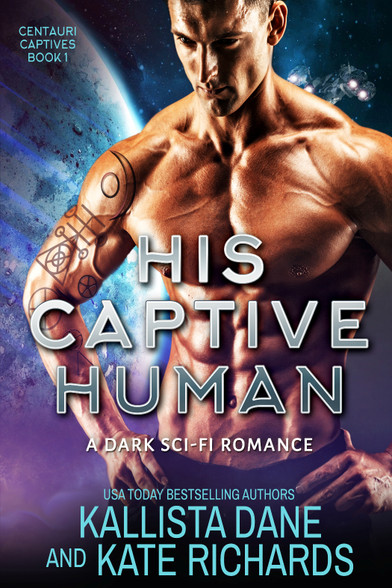 HIS CAPTIVE HUMAN
by Kallista Dane and Kate Richards

Mantsk
My world is gone.

Everyone on Arythios killed, our planet left uninhabitable. Destroyed by an unknown enemy while I was away on maneuvers with a small fleet of starships. We’re all that’s left— an elite team of warriors adrift in space with no home, no hope. And no females of our race left alive.

We begged the Interstellar Federation for help, but all they sent us were a handful of females from a primitive planet called Earth. “To see to the needs of your troops,” their leader said.

I swallowed my pride and accepted. With no Arythian females, we needed breeders. Though they were small and pale, the aliens would have to do. So I picked one out and started teaching her our ways.

She’s stubborn and full of fire, but she’s awakened a dark hunger in me. I had no idea I’d have to dole out so many punishments to train her properly—or how much I’d enjoy the task.

Jess
My world is gone. I’ve never been so scared.

I volunteered for a diplomatic mission to the beautiful world of Arythios. But the Federation lied to me. The planet doesn’t exist anymore. Instead I woke up on an alien starship, surrounded by huge gray-skinned warriors who think I’m their new sex toy.

I’m adrift in space with no home, no hope. Their arrogant captain says I have to call him Master and obey him. When I don’t, he punishes me.

And the scariest thing of all is—I’m starting to like it.

Centauri Captives is a brand new sci-fi romance series from USA Today Bestselling Authors Kallista Dane and Kate Richards featuring masterful alien heroes and captive Earth women they take as mates in a desperate attempt to save their race from oblivion.