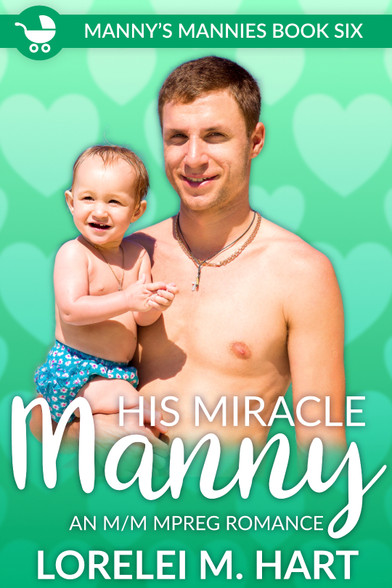 To be a manny who swoops in, saves the day and then swoops out before dealings grow to deep...or at least that had always been his plan…

Omega manny Sebastian loves his job. He helps the families who need him most from sets of triplets to suddenly single parents to micro-preemies. His training as a nurse gives him skills most mannies don’t have, making him one of Manny’s top employees. He goes in during times of great need and moves on when they no longer need his help. It works for everyone.

That is, until now.

Alpha Walker is struggling. He never planned to be a single father. Who plans for their mate to die in childbirth? Walker is strong—stronger than he knows. Only he doesn’t feel strong. His son is about to have surgery, surgery that could be life altering, surgery that could be the difference between life with a walker and in a chair and one on two feet. His recovery will require more care than Walker can give. While in-home health care will be an option, Walker wants better for his son than rotating nurses, so when he sees an ad for Manny’s Mannies, he calls on a whim.

Manny’s got him covered. He has an employee with the perfect background and skills. He neglected to mention that he was hot, sweet, and lickable. Not that Walker would lick him. That wouldn't be right. Unless he asked. Then he could be persuaded.

And Sebastion so very much wants to ask. He has always been able to keep his heart sheltered and his emotions intact while working, but, with Walker, it grows exponentially more difficult with each passing day. Walker is everything Sebastion didn’t even know he wanted in an alpha and so much more. But work was work...or was it?

His Miracle Manny is the sixth book in the popular Manny’s Mannies series and is a super-sweet with knotty heat M/M non-shifter Mpreg romance that can stand alone. It features a hot manny with skillful hands, a widowed alpha who deserves to love again, a little boy who refuses to give up and only hears the positive, and a very naughty kitten.