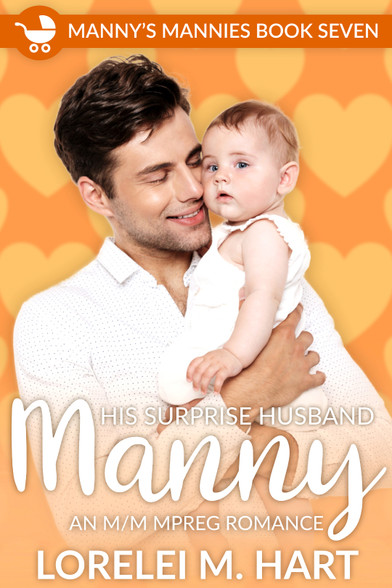 What happens when a fake relationship no longer feels pretend?

Alpha Cash Hanson’s life turned upside down when his stepbrother passed away, leaving him a baby. He loves Daryl and vows to be the best father he can be for the sweet baby boy entrusted to him, including hiring a manny through the best agency there is: Manny’s Mannies. Unfortunately, the transition from single successful businessman to single father becomes exponentially more challenging when a relative decides they have a claim to the child—and his trust fund.

Omega Simeon Meyer is floundering, trying to find his place in the world. After dropping out of nursing school, he has no idea what to do next. When his friend suggests he manny while figuring out his future, he scoffs at the suggestion. Who wants to be a manny? But as student loan payments for a degree he never finished begin to come due, he throws his name in the hat. Worst they can say is no, right?

Simeon arrives at the interview to find an exhausted, overwrought alpha who informs him his son no longer needs a manny and not to waste his time interviewing. Simeon quickly sees that Cash doesn’t need a manny. If the alpha is going to get full custody of his son, he needs to prove he can provide a stable home. Cash needs a husband. And Simeon never could resist an alpha in need.

His Surprise Husband Manny is a sweet with knotty heat contemporary mpreg romance from the popular Manny’s Manny series. It features an omega who finally has found his place in the world, an alpha who will do anything to protect the sweet orphaned baby in his care, a fake marriage that quickly begins to feel not so pretend, a cat that decides it has found hits home whether the humans agree or not, and a family built on something more powerful than blood—love. If you love your alphas hawt, your omegas strong, and your mpreg with heart, this book is for you.