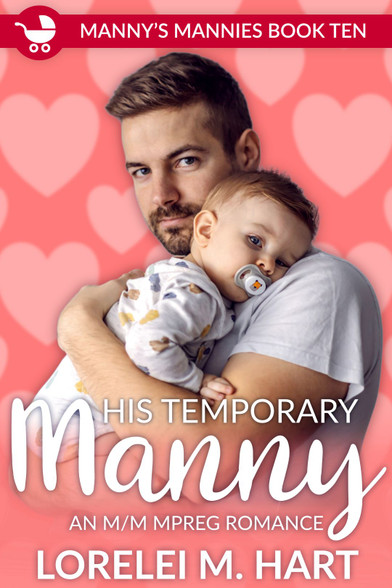 And then there was the time Manny became the manny...

Widowed omega Kristoff is in over his head. His manny decided it was the perfect time to follow his dreams and backpack through Europe for a month just as Kristoff’s job is in the midst of a major restructuring, requiring insane hours. He calls Manny, pleading for help when no one answers his ad, not that he blames them. It had been hard enough to get a manny when it was just the triplets and now? Now he had the addition of their three cousins after the death of their mother. Please let someone be crazy enough to take the job.

Alpha Manny works hard to connect the perfect manny to each of his clients. It works—often too well. He’s lost more mannies to marriage than all other reasons combined. When Chris calls, he scours his lists, places ads, does everything to find the perfect match, but there just isn’t one. Six kids is a lot on a good day, but when three of them are still in diapers and have recently suffered a tragic loss, it was beginning to feel impossible. Manny refuses to give up. He will take the job temporarily until the perfect match comes along. It would be a week or two tops.

When Manny and Kristoff meet, their chemistry is instant, but Manny has been there...done that. After a bad breakup and more heartache than he ever wants to endure again, he has a rule, no dating people with children, and he’s stuck by it. Breaking up sucks. Breaking up and losing the kids in your life...that is a whole different level of misery. He isn’t going through that again even if Kristoff has him feeling things he never had before. Nope. Not going to happen.

If only emotions were that easy.

His Temporary Manny is the final installment of the popular sweet with knotty heat contemporary mpreg romance Manny’s Mannies series. It features Manny, who fills in as a manny...just for the month, an omega who has unexpectedly had his household double, creative triplets who keep them on their toes, three cousins in need of a home, a mother cat and her adorable kittens, and a family built on the best thing of all—love. If you love your alphas hawt, your omegas strong, and your mpreg with heart, this book is for you.