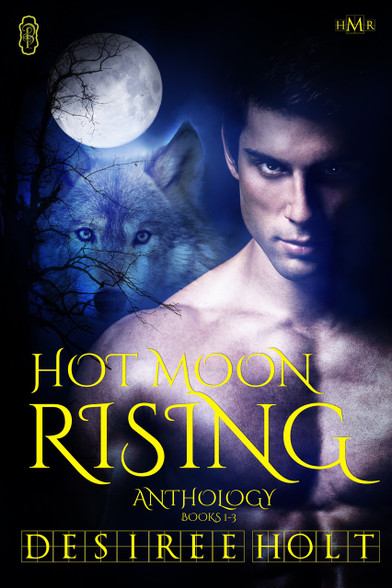 WOLF MOON (book 1):
Shape-shifter Alexa Morgan fled her home in the north when her relationship with a human ended in disaster and the clan alpha shunned her. Now living in Florida, against all her better judgment she finds herself in a hot relationship with Jesse Farrell, the cop next door. Despite her knowledge that the relationship is doomed, she cannot stay away from him. When Jesse, a gang task force member, is hurt one night on the job, Alexa begins to spend her nights tracking him, keeping him in her line of sight, determined to protect him. But she’s terrified of his reaction when he discovers her true nature. Will he accept her or bolt as her other lover did, leaving her destroyed?

VENUS MOON (book 2):
She dances by the light of the full moon, a goddess with blonde hair who swiftly shifts into a magnificent silver wolf. A year ago, Charlie Aquino and his partner had nothing more on their minds than the gangs they dealt with. Now Jesse is married to a shifter and Charlie is so obsessed with one he drives by her house every night just to get a glimpse of Liane Cosa. He’s met her in human from but never dared approach her in her wolf from, afraid she’ll bolt. But then, one memorable night, he screws up his courage and beneath a full moon offers her his heart. Can she accept it?

BLOOD MOON (book 3):
Hunger. It drives the wolf. Hunger for food, for domination, for sexual satisfaction, and for revenge when one of their own is harmed. So it is when Hannah Raines is kidnapped by an insane geneticist who wants the female shifter for his bizarre experiments.