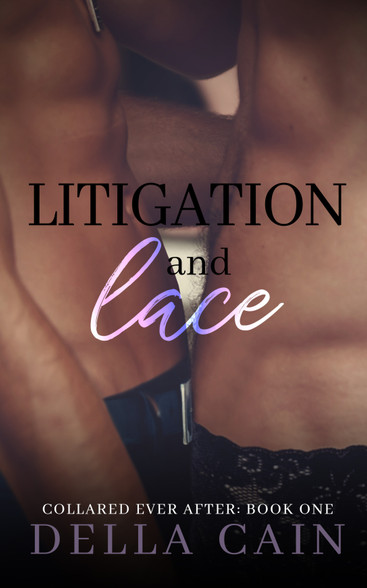 LITIGATION AND LACE
by Della Cain

Johnson longs for a little of his own—a little who loves to see his daddy wearing manties. If only such a man existed.

Attorney Ryan Johnson has given up on ever being called Daddy again. He has a good life and, if that part of his life isn’t fulfilled...then that’s just the way it is. Who wants a daddy who likes to dress up in lingerie? From his experience—exactly zero.

Kasper Winston accepts the position as general counsel at his former housemate’s newly formed foundation, shattering the last thread connecting him to his family. It’s bad enough he didn’t settle down with a nice girl from church after college and fill a minivan with babies, but then he left the family firm for a new position in the sinful city.

After meeting at a handfasting ceremony at Club Collared, the attraction between the two lawyers is instant. The two eat, chat, and laugh the night away, neither of them wanting it to end. But it has to. Kasper is too new to the scene for Johnson to ask for what he truly desires.

Litigation and Lace is a MM romance featuring a smexy daddy in need of a boy, a hawt lawyer exploring his sexuality for the first time, lots of lace, age play including some minor exploration of ABDL, and two men discovering that true love always leaves room for negotiations. Litigation and Lace is the first book in the Collared Ever After MM romance series. Each book focuses on a new couple who find their Kinkily Ever After at Club Collared.