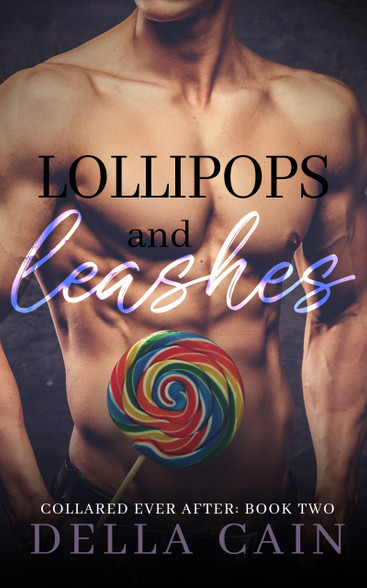 LOLLIPOPS AND LEASHES
by Della Cain

Sometimes the Daddy you are looking for isn’t a Daddy at all.

Evan Taylor gave up finding a Daddy years ago. Instead, he focuses on his successful candy shop, embracing his little side on his own. It’s not the same as being taken care of and being loved, but it’s something. Playdates, craft hours, and story times at Club Collared help fill the void left by being daddyless—sort of.

Sebastian Hunter never expected to be back in the city, but there he is working a stressful job as a systems analyst and missing country life. What he really needs is a Master, someone to take control and allow him to fully sink into his puppy space when his workday is done. He joins a local puppy play group, and it fills the void of being masterless—sort of.

When Sebastian’s puppy pack joins forces with Collared to raise money for a local youth center, the last thing he expects is to see his first love, Evan, and especially not in a diaper. But then again, Sebastian is wearing a tail.

The two reconnect, the sparks and feelings from their old relationship resurfacing quickly. Only one thing stands in their way: they both need what the other can’t give—or can they?

Lollipops and Leashes is a second-chance MM romance featuring a little with no daddy, a pup with no master, an old flame rekindled, lots of sugar, two men discovering if they can be enough for their one true love, and the sweetest thing of all...a happily ever after. Lollipops and Leashes is book two in the Collared Ever After MM romance series; each focuses on a new couple who find their Kinkily Ever After at Club Collared while keeping in touch with old friends.