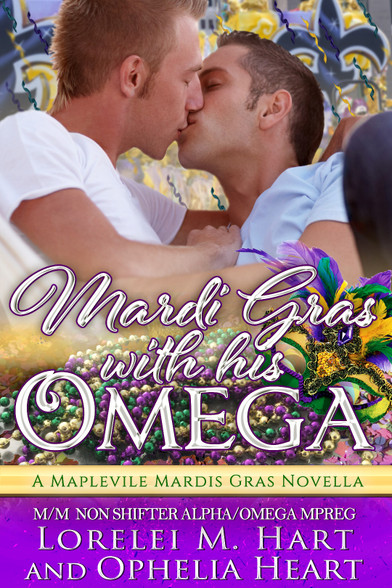 Mardi Gras with his Omega

MARDI GRAS WITH HIS OMEGA
by Lorelei M. Hart and Ophelia Heart

When omega Brent accepts his future stepfather’s all-expense paid trip to NOLA to meet his future half-brother, Jaxon, he anticipates they will hang out together, drink a little too much, and collect beads. What he doesn’t expect is for Jaxon to fly out of town as soon as he arrives, leaving him with an apartment full of mooching guests.

Alpha Joaquim is nomadic by nature, taking one traveling nursing job after another, never growing roots. After his last day working in NOLA, he decides to burn some of his restless energy and explore the town. The second he sees Brent on the balcony, he knows he needs to meet the sexy nerd who captured his attention.

After one steamy night, both are hooked. Unfortunately, fate has other plans—a fire at Jaxon’s apartment calls Brent away, and a misplaced note ruins all chances of them reconnecting—or does it?

Mardis Gras with his Omega is a super sweet with some knotty heat non shifter mpreg romance.