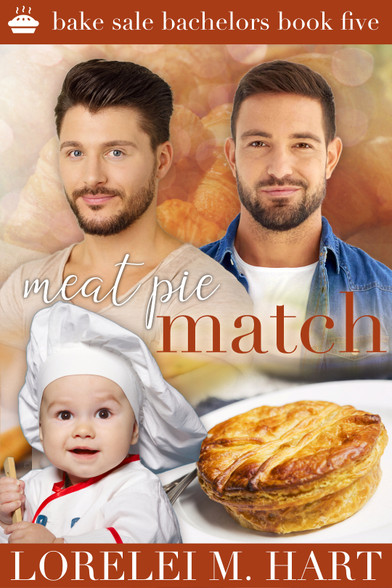 The best pies are made with a lot of love…

Widowed Alpha Travis, owner of Dellburn’s butcher shop, Meat, has no desire to find love again. He already met and lost his one true love and has no desire to feel that pain again, but when Carin comes calling, he knows he needs to help with her fundraising event by donating the meat for the dinner. He won’t bid on any of the pies—he’s firm on that. The last thing he needs is a date with a bachelor.

Omega Aaron loves his job teaching at Dellburn Elementary. Knowing he makes a difference in the lives and futures of his students is his calling—or at least it is now. At one time he wanted nothing more than to be a father, his plans crushed when his alpha of four years admitted he never wanted children and never would. When his students tell him about their outdoor time at the community center being limited to just a corner of the pavement, he knows he must do something to help. He might have sworn off dating, but what could one date hurt if it could help the children?

When Travis gives in and bids on the most unusual pie at the fundraiser, he doesn’t expect to win. But he does—and his meat-pie prize becomes a total meat-cute when Aaron sets up a date to learn how to bake the pie...and more than the oven heats up.

Meat Pie Match is a super sweet with knotty heat mm non-shifter mpreg romance featuring a butcher who has the best meat in town, a teacher willing to go above and beyond for his students, a grandfather who isn’t quite willing to share all his baking secrets, a bossy one eared rabbit, and more than a pie in the omega's oven. Meat Pie is the second installment in season two of the popular Bake Sale Bachelor series. While each book is set in the same world, they can each be read as a standalone, giving you the happy feels.