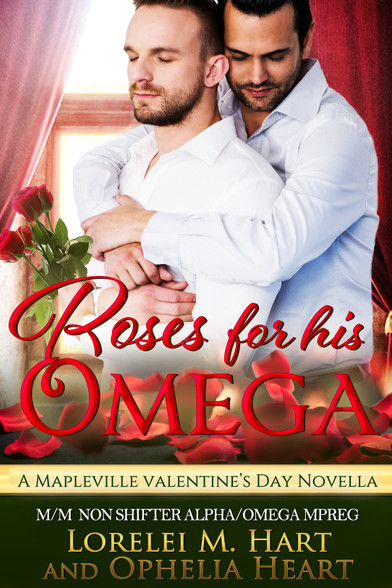 Roses for his Omega

ROSES FOR HIS OMEGA
by Lorelei M. Hart and Ophelia Heart

Attending a Valentine’s Day wedding solo, when your “plus one” just dumped you, is about as romantic as a visit to the dentist.

Reid hesitates to accept the invitation to his college roommate—and onetime lover’s midweek wedding, but at least he has an enviable date in hotshot lawyer, Topher. Until, after Reid’s bought their plane tickets and made all the plans, Topher dumps him. Rather than stay home and mope, he chooses the possible lesser evil and heads for Mapleville. He’ll deal with his misery and the snowball of ways his life is falling apart when he gets home. One thing for sure, he’s not going to make important decisions based on the vagaries of an unreliable love life. Maybe the good things of life are just not meant for him.

Kayson lives a good life, by most accounts. He works with his aunt at her local florist shop creating beautiful arrangements and spreading sunshine through botanicals. He lives in a town he adores. He has the finances to live peacefully without financial stress. Only problem is, he is lonely. He longs for a mate, someone to spend his life with, raise a family with and in small town Mapleville, there just wasn’t anyone who fit the bill.

When Knox and his future bride, Celeste, hired Vivian’s Roses to do their wedding flowers, it appeared to be just a typical gig and then bridezilla came out. Between switching orders and outbursts there was nothing more he wanted than to have the wedding be over and done with. Until a coffee shop encounter with Reid turned his world on its axis. Instant chemistry and a connection like none he’d experienced before had him wanting time to slow giving him the opportunity to convince Reid to stay in Mapleville and be his omega, his mate.

Roses for His Omega is a Valentine’s novella filled with enough sweetness to cause cavities, a touch of knotty heat, and enough love to go around.