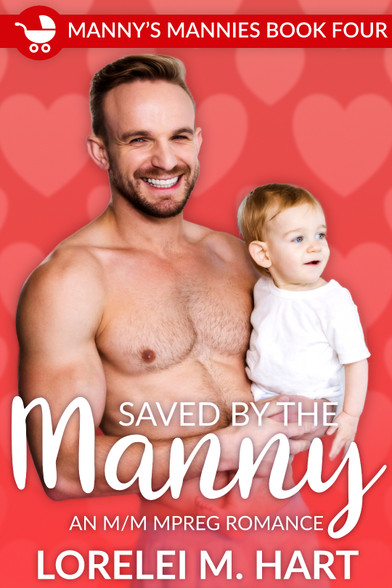 Saved By the Manny

SAVED BY THE MANNY
by Lorelei M. Hart

Life Lesson: Groupies are not the best choice of a mate.

Alpha Judson loves music. Unfortunately, he can’t carry a tune in a bucket. He can, however, run a sound system like a boss and soon finds himself touring the world with some of the biggest bands. He is living the dream: great music, a good living, and wonderful twin boys. His mate is...less wonderful, leaving him with his twins when she figures out Judson is not the staircase to her own freedom.

Life Lesson: Not everything you hear about concert tours is true—just the good parts.

Omega Edwin needs a job and now. When he is offered a job caring for two kids whose father tours with the biggest band on the billboard charts, his gut reaction is to decline. They are alcohol-and-drug-filled month-long parties, or so the rumor goes, and the one thing Edwin doesn’t need is to be around a bunch of drunks. He had enough of that growing up.

Life Lesson: Always get it in print.

Iliana, the kids’ mother, comes around making noise about wanting the kids, and all semblance of normal—normal for a concert tour anyway—flies out the window. Threats are made, lawsuits are filed, and things get ugly quickly. Edwin refuses to leave Judoson’s side, determined to help him keep his family and possibly make one of his own.

Saved By the Manny is a super sweet with knotty heat non-shifter M/M mpreg romance featuring two intelligent and energetic twins boys, a band far less party-oriented than anyone could have guessed, a sound manager who would do anything for his children, and a manny would would do anything for said sound manager. It is the fourth book in the popular Manny’s Mannies series and can be read as a standalone.