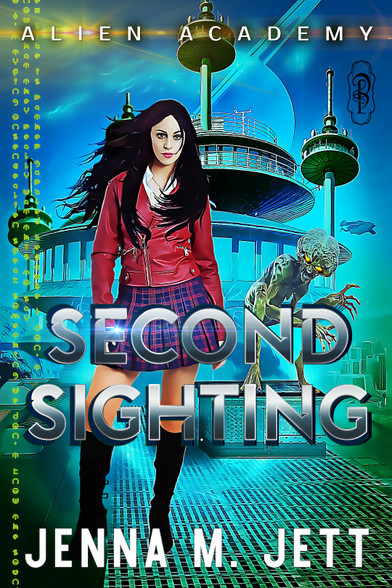 I’m Zoe, and I’m a half-alien…
I’ve survived the first month of school at Alien Academy, where I hope to learn how to be what I am. I guess. So far, I’ve discovered I have a gift for science, something I knew as a child but somehow forgot while being a teenage girl on Earth.

I’ve also learned that it’s possible to be completely head-over-heels for three guys at once. All royalty. From far-off planets. They are among the many students here who are 100 percent alien—and they are 150 percent hot. Lumino with that platinum hair and eyes all shades of blue and gold, Xanirius, the most alien looking with his pale-gray skin and those mysterious tattoos, and Prince Jhoren, the only one who actually uses his title on a daily basis. But why are they here…not that I am not very glad they are!

There is some kind of shapeshifting monster on campus as well, that appears from time to time and has already managed to kill one student. While I feel more at home here than I ever did anywhere else, sometimes my previous life as a pharmaceutical rep sounds very appealing. Then I just had to fend off the occasional amorous doctor I didn’t want any part of. Now, I am drawn to three guys at once! How do I choose between them?

I’m sure I have a place in all of this. Wherever I’m from—another secret for some reason—I suspect I play a role in the larger picture. Most of the other students have always known their heritage, and some are even planning to travel to the planet where they come from, but what about me? And I’ve heard whispers of an intergalactic war…

Second Sighting is a science fiction academy romance. The heroine is new to the truth that there really are aliens out there, but she finds herself with three sexy guys ready to help her make the transition. This is book 2 of Alien Academy, and the heat and suspense will climb with each story. This slow-burn reverse harem romance will make readers crave more with every page.