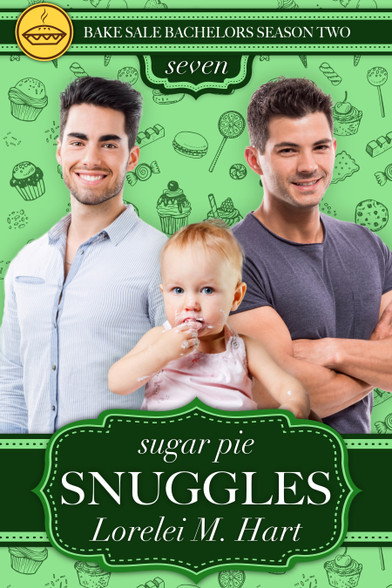 Sometimes second chances are baked in a pie…

Denis had the career of his dreams as the star of the Polar Bears hockey team until a stick to the knee took him off the ice—permanently. The guy responsible—his nemesis for nearly a decade—took a foul for it...a stinking foul. Lost and alone, he heads back to Dellburn. Hiding out in his hometown had never been his plan, but there he was doing just that.

Rylan loves his job running the arts program at the local community center. It allows him to give back, while doing what he loves. His career fills his days—but at night? The loneliness sets in. Spending his life single had never been his plan, but there he was doing just that.

When the Annual Pi Day Bake Sale to raise funds for the local children’s hospital comes around, Denis bids on a pie that reminds him of the one who got away. Little does he know, that’s exactly who made it. Reconnected after years apart Denis and Ryan’s love is rekindled, but is love enough when their futures still look so different?

Sugar pie Snuggles is a second chance super sweet with knotty heat mm non-shifter mpreg romance featuring an alpha hockey player whose career is cut short, an artistic omega, the one who got away, a pie from memory lane, a pet rabbit who loves thinks he’s a dog, snuggles—so many snuggles, more than a pie in the oven—and a guaranteed happily ever after. If you like your mpreg sweeter than a slice of homemade pie, your happily ever afters complete with a bundle of joy, and your mpreg with heart, this installment of Bake Sale Bachelors is for you. While each book in the Bake Sale Bachelors series is set in the same world, they can each be read as a standalone.