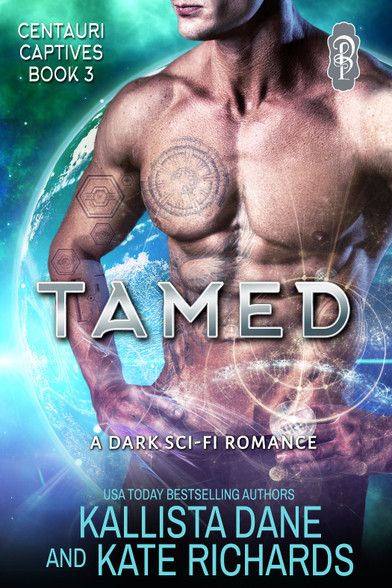 Joran
I command an elite team of warriors. Lead them into combat, conquer my enemies. How can one human female be so hard to tame?

Once our world was the pride of the galaxy. Now Arythios is gone. Destroyed by evil forces while we were away. Our leaders, our friends, our lovers – all dead. We alone survived. But without offspring, our race will not.

Homeless, hopeless, we begged the Interstellar Federation to help us track down and vanquish our enemies. They ignored our request. Instead, they sent us a handful of females from a primitive planet called Earth. “To see to the needs of your troops,” their ruler said.

I was ordered to choose one of the aliens. Breed with her. My human is stubborn and undisciplined, not like our sweet, gentle Arythian females. Her fiery spirit tempts me to indulge my darkest desires. But if she is to be my mate, she must learn to obey me. She will submit – or she will be punished.

She will be tamed.

Xia
I may be the captive of an alien warlord. But I call no man Master.
And I never will.

A feral child, abandoned in the wild, I survived by being stronger, tougher than the most ferocious beasts. After my rescue, I trained as a warrior. Fighting side by side with the men, yielding to none. Now I’m trapped on an alien warship. The arrogant commander thinks he owns me. He’s determined to turn me into his submissive mate. I’m determined to escape.

I can never let him know I find his dominance wickedly arousing. Stern punishment won’t bring me to my knees – but I’m becoming a slave to the passion he’s awakening in me.

Centauri Captives is a steamy sci-fi romance series from USA Today Bestselling Authors Kallista Dane and Kate Richards featuring masterful alien warriors and the captive Earth women they take as mates in a desperate attempt to save their race from oblivion.

Each book is a stand-alone, introducing a strong smart heroine and a super-hot alien hero locked in a battle of the sexes as old as the Universe.