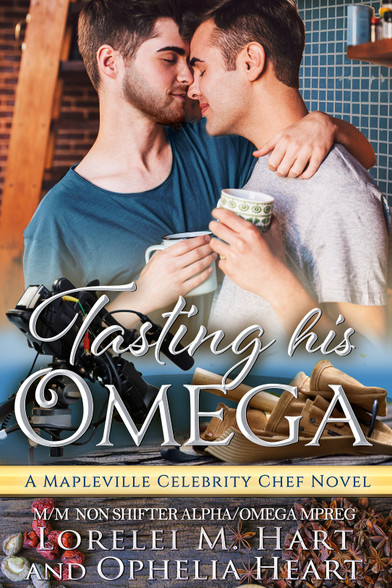 TASTING HIS OMEGA
by Lorelei M. Hart and Ophelia Heart

Fame isn’t always what it is cracked up to be.

Alpha Lucas loves being a chef. It is his calling. Unfortunately, his calling comes with a side of being famous. Lucas can’t even go to a simple craft fair without having hordes of people swarming him, wanting an autograph, a recipe, a photo op. Professionally, he has the world by the balls, but personally, he never can be sure if someone wants him for him or for his fame and that makes for a very lonely existence.

Omega Harrison was born in Mapleville and raised there by his grandfather after his mother died far too young and his father rejected him, choosing to search out fame over his own son. Harrison likes his life, even if, after the passing of his grandfather, it is an almost solitary existence. Handcrafting beautiful furniture from wood pays his bills, but his true love is creating beautiful art pieces from the random fallen branches and logs he finds in the woods behind his house.

When Harrison drops and empty box on the way to his truck after a successful unjuried craft show, Lucas can’t help but be intrigued. The sexy woodworker agrees to a date before they both leave town. The date goes better than expected, and Harrison leaves in the morning unknowingly pregnant.

Lucas immediately feels the loss of the omega he thinks of as his and when an opportunity arises to shoot a television show in Mapleville, the town Harrison had mentioned being from, Lucas jumps at the chance to reconnect. Only problem is, after Harrison’s father rejected him, he is pretty against having anything to do with fame.

Tasting his Omega is a super sweet with some knotty heat non shifter male pregnancy romance with a guaranteed happy ever after.