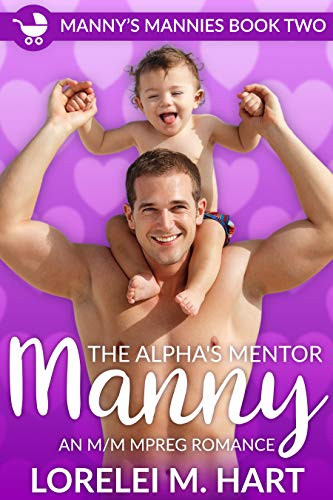 Omega Graysen loves his job teaching art in a local public school. He gets to be creative all day and still has the summer to spend with his favorite person—Jasper, his two-year-old nephew who he became guardian of after his omega brother’s imprisonment. Unfortunately, teaching barely pays the bills, and when his small home needs a new roof, he has no choice but to fill his summer with a seasonal job, but those are rare. Thank goodness for Manny’s Mannies.

Widowed alpha Kylos is the perfect parent raising an equally perfect son. How could they not be? Kylos wrote the book on it, a book that has been on the bestseller list for almost a year and still soaring. When his publicist suggests he be the honored guest on the Cruising Your Way to Better Parenting cruise, Kylos’ original answer is no. After all, his son, Eric, has cello lessons, engineering camp, test prep classes, and a thousand other things to do that summer, and giving up two weeks would only hinder his chances of completing them all in a timely fashion and could ultimately harm his chances of getting into a prestigious high school and eventually an Ivy League university.

Kylos’ publicist has other ideas, and next thing he knows, Kylos is hiring a temporary manny to attend the cruise with them. As long as the manny is willing to follow his schedule and knows something about math, all should be fine—or so he tells himself. Little does he know that Graysen not only isn’t a schedule follower, he also isn’t alone.

The Alpha’s Mentor Manny is the second book in a sweet with knotty heat contemporary MM mpreg romance series of standalones featuring hot mannies, the men they love, and the families they grow to be a part of. The Alpha’s Mentor Manny features an alpha who knows far less than he think he does, an omega who flips his world on its head, a nine-year-old who has never been allowed to be a kid, and a toddler whose smile lights up a room.