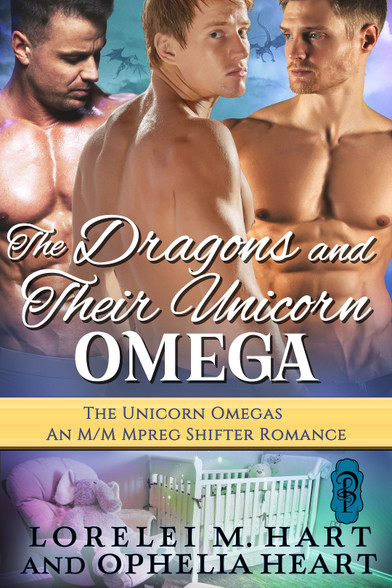 The Dragons and Their Unicorn Omega

THE DRAGONS AND THEIR UNICORN OMEGA
by Lorelei M. Hart and Ophelia Heart

When most people think of unicorns, they think of rainbows and glitter. Grey’s life resembled neither of those things.

Grey, named after what his herd deemed his ugly gray coat, has never had a good life. Shunned for his lack of powers and held captive by the red dragons who plan to sell him to the highest bidder, Grey escapes into the night. He hopes to find someplace safe, so the town of Haven calls to him.

Ryder and Theo are dragons and true mates—the only problem is they are missing their third, the one to complete them. When they stumble upon a broken-down car, the last thing they expect is to find the one they have been waiting for all those years.

Protective and loyal, Theo and Ryder are determined to keep their unicorn safe and encompassed in love. The red dragons have other ideas.

The Dragons and their Unicorn Omega is a sweet MMM MPREG shifter romance with some knotty heat.