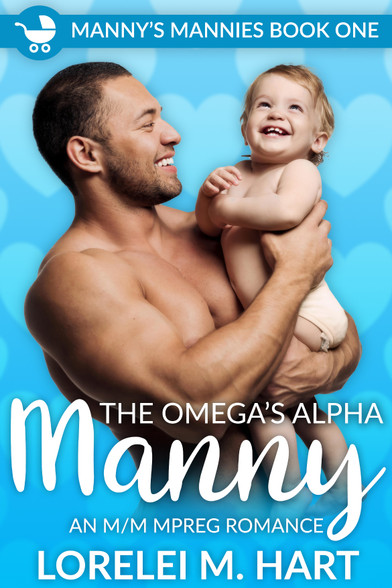 Omega Ronnie thought he had everything until cancer stole his happily ever after. Left alone with his beautiful daughter, he soon discovered he was pregnant with baby number two, a child with a rare birth defect. He’s an amazing father to his two little girls, but he knows he needs help—so he turns to Manny’s Mannies.

But when Ronnie opens the door to see his college crush, Zave, he realizes he might be getting more than he bargained for.

Alpha Zave has never quite found his place in the working world. But even though he’s had bad luck at his jobs, he’s certain the perfect career is out there. He just doesn’t know where to look. When his current company has a temporary shutdown, he goes to work for Manny as a stopgap.
He never imagined his temporary position might lead to love.

The Omega’s Alpha Manny is the first book in a sweet with knotty heat contemporary MM Mpreg romance series of standalones featuring hot mannies, the men they love, and the families they grow to be a part of. The Omega’s Alpha Manny features an alpha who is very un-alpha, an omega who is all alpha, and two adorable little girls.