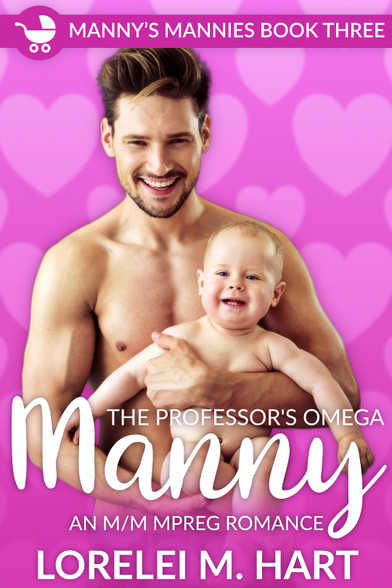 For Carter, an alpha professor of omega studies, life comes crumbling down when two officers show up at his work with horrible news and three young children in tow. His brother Joey was killed in a car accident, leaving his kids orphans. Carter immediately agrees to take them in, quickly realizing he’s in way over his head. He needs help—he needs Manny’s Mannies.

Omega Beckham was on track to become his family’s first lawyer—until his grandfather became ill and he dropped out to take care of him in his dying days. He took on a new, more feasible goal of becoming a nurse and started working as a TA. But then his employer gets arrested and he comes home to an eviction notice and discovers his roommate was stealing the rent money. Jobless and homeless, he needs a solution and fast—he needs Manny’s Mannies.

When Carter opens the door to greet his new manny, he’s shocked to see his one-night stand from years earlier—the one he could never forget. If the kids didn’t immediately love Beckham, Carter might’ve asked for a replacement. Now he has to repress his longing for the manny he once spent a magical night with.

If only it were that easy.

The Professor’s Omega Manny is the third book in a sweet with knotty heat contemporary MM mpreg romance series of standalones featuring hot mannies, the men they love, and the families they grow to be a part of. The Professor’s Omega Manny features an alpha who’s in over his head, an omega who flips his world on its head, three adorable children who have faced an unbearable loss, and the house renovation that does not end.