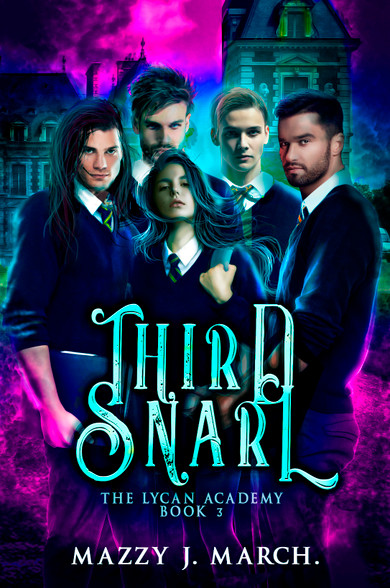 I can’t fight what I feel anymore. I don’t have to choose. I belong to the Volkovs and they belong to me.

Nora Blessing’s first year as a wolf shifter at The Lycan Academy is speeding toward its conclusion. It’s been both the best and worst year of her entire life. So far she’s learned her entire life story is a lie. Her aunt is not her aunt. Her parents are not dead—or at least didn’t die when she was little. And she might not be completely a bitten shifter. Oh...and she has a twin sister.

What she does know is she’s crazy about four Russian brothers who want to be her everything in return. But she’s turned away from them yet again, feeling out of her depth. Also her best friend AJ is missing and nobody seems all that worried about it except her.

She’ll need to go on a wild ride to find her past, resolve the demons in her present, and secure her future. If she has the gifts to make it happen.

Third Snarl is a paranormal shifter academy romance with four of the sexiest guys ever and a brand new shifter finding her way in their world. It’s book 3 of the Lycan Academy, and the heat and suspense will climb with each volume. This slow-burn reverse harem romance will make readers crave more with every page.