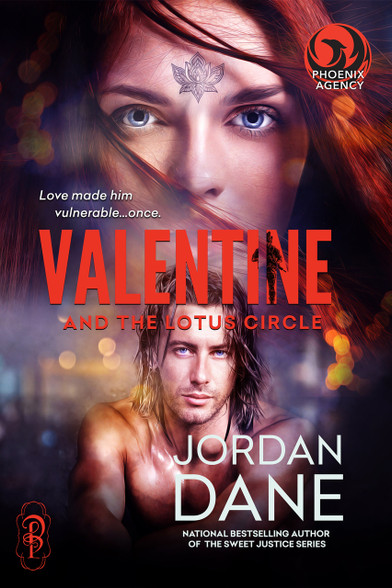 Valentine and the Lotus Circle

VALENTINE AND THE LOTUS CIRCLE
by Jordan Dane

Six months ago, Braxton Valentine had it all. He was on his way to meet the parents of the most beautiful and loving woman in the world. He'd given up his dangerous career in black ops with the CIA to start a life and a family with his fiancée, Raine Garrett. But Brax and Raine never made it to Los Angeles. Tragedy struck on a westbound train to California and Valentine lost everything.

Now he has to look up to see rock bottom. After recovering from a gunshot wound, he's grieving and riddled with guilt over Raine's death. The Phoenix Agency wants to recruit him for his black ops skills and his unprecedented psychic ability, but he's a loner and an angry one-man wrecking crew who is about to be booted off the team.

Mia Romeo, head of the Phoenix Agency Psi division, wants one last chance for Valentine. She brings in a mysterious woman from the ancient order of the Lotus Circle to break through his psychic defenses, but Clarity Tremaine has an agenda that's interrupted when Mia’s husband and his team go missing on a covert mission into Mexico.

All bets are off for Valentine to fit in. He's the only operative Mia has to salvage the mission with innocent lives on the line. Valentine is willing to risk his life to honor Raine's memory, even as he battles his obsession for revenge against the cartel boss who took her life. To find a reason to live, he must bridge the gap between love and hate.

But before he steps foot in Mexico, he crosses the path of an unusual visitor to his safe house in the Texas Hill Country. He'll soon learn that bridges are meant for crossing—not staying.